"WHEN THE SEAGULLS CRY, NO ONE IS LEFT ALIVE..."

My Halloween pictures. I was a character named Ange (French for “Angel”) Ushiromiya – she’s the younger sister of the protagonist, Battler Ushiromiya, from a murder mystery (Between a human culprit, or a magical witch...Whodunnit?) visual novel & anime called “Umineko no naku koro ni” (When the Seagull’s Cry).

Think about the Agatha Christe novel,“And Then There Were None” – except add witches and magic, and the murders being repeated with changes each time (ie: if one person dies in one “game”, they might not die in the next one) until Battler or Beatrice (The Golden Witch, and the antagonist until “End of the Golden Witch”) admit defeat – did a human kill all these people, or did a witch do it with magic? 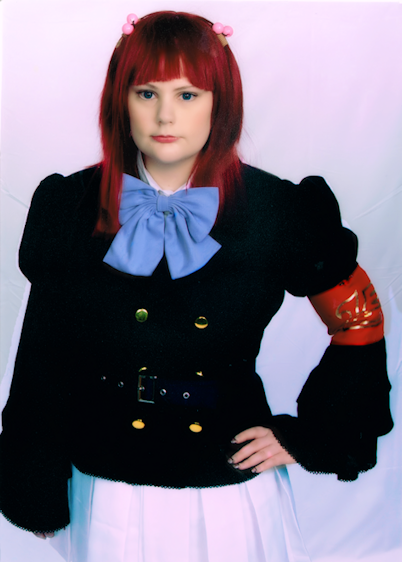 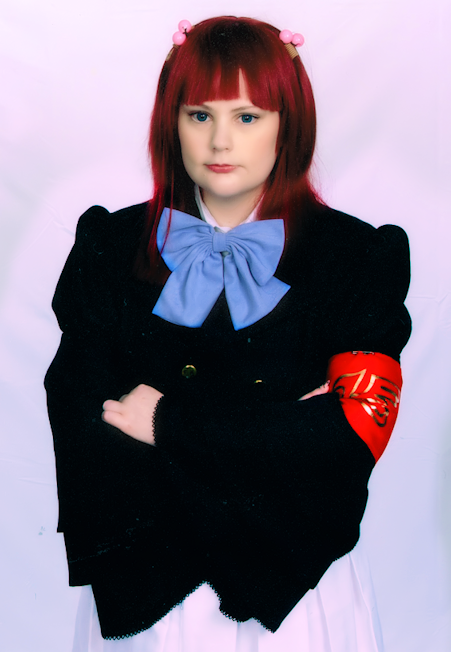 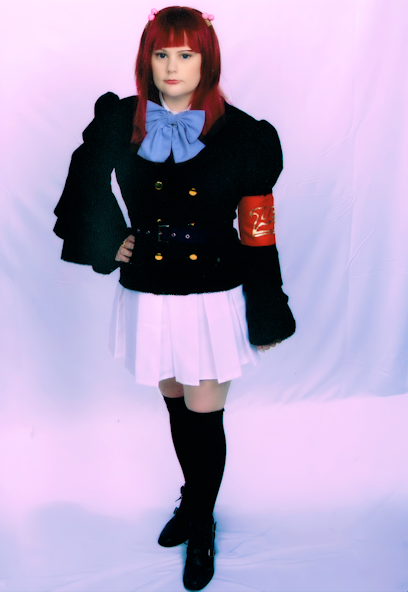 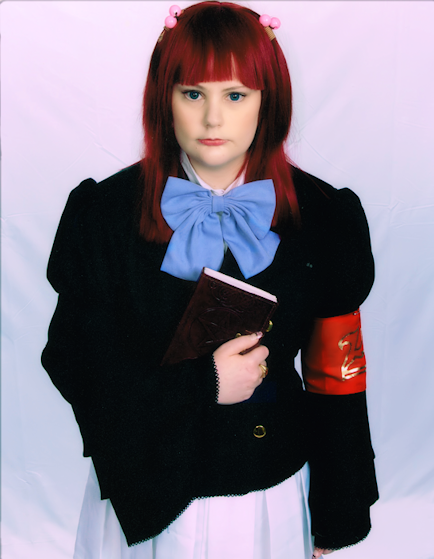 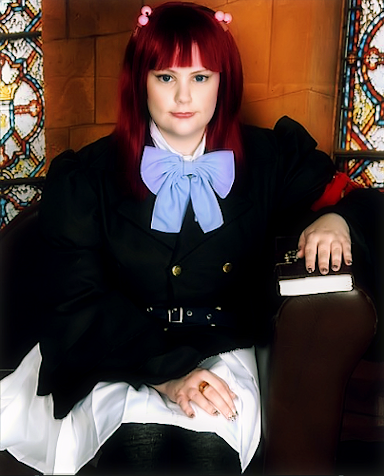 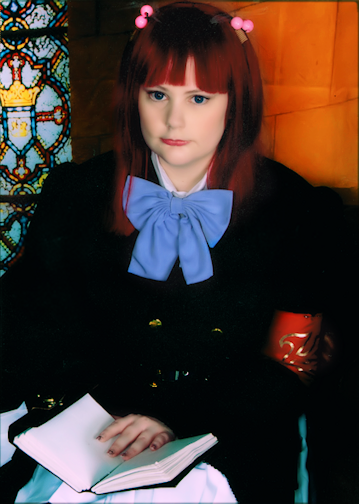 I saw Lady Gaga on Monday, and you guys, that was honestly the most fun I have had in YEARS! Since 2008, to be exact. Even my sister had a blast, and she only knew songs from TF and TFM + "Born This Way" and a little of "Judas". I'm going to go into more detail in a review post, but I just wanted to get this out now so I can tell you to go and see the Born This Way Ball when it comes to your area. Shit, I'm thinking of going to one of her March shows in another state because I had THAT much fun :3

I think that's all! XD Happy New Years, everyone!

The first time I'd seen Les Misérables was back in 2003, almost 10 years ago. I was 17, and I was into the more pop/rock musicals, but also wanting to get as many of the most popular musicals - in a way - "under my belt". I'd just gotten into stage musicals a year earlier, so and all I had seen live before Les Miz was "The Phantom of the Opera", "CATS", "Beauty and the Beast", and "My Fair Lady."

We had amazing seats! We were in the lodge (the area before the 1st balcony), in the first row of the center section, and had the two a isle seats (no crawling over people!), and no one was in front of us, so we didn't have any obstructing views (heads); from where we sat, all we could see was the stage and the orchestra pit. Ah, they were just so PERFECT!

The production I saw tonight, the 25th Anniversary Tour, was so much different than what I saw nearly 10 years ago. Some of the new things I liked, and some I didn't. I'll go into what I liked first.

But anyway. The cast was great, the costumes were beautiful, the music is to die for, the new sets were amazing, and I love the projection on the stage as the back drop.

If it's coming near you (or if you live near New York or London) I encourage you to go see it! It's such a tragically beautiful show.

lady_leia_solo at Please Share This. Thank You!
Originally posted by

ladyhadhafang at Please Share This. Thank You!
Originally posted by

girlofavalon at Please Share This. Thank You!
Originally posted by

masterde at Please Share This. Thank You!
Originally posted by

teleens_journal at Please Share This. Thank You!
Spreading Romney has gotten off of the front page of Google.  Whatever your feelings on Dan Savage, the reason behind him starting this site is a just one - Mitt Romney shared this story about strapping his dog to the roof of his car as a way to "connect with the common man."

I don't want an animal abuser in the White House, how about you?  Anyone who is that cavalier about abusing animals won't give a crap about abusing humans, either.

Please share this far and wide.  Thank you for your support.

Does anyone remember the dog we found sleeping on our porch? If not, basically, back in February, my mom and I found a little chihuahua mix sleeping underneath the covers of one of our stray cats bed.

Anyway, she was fixed last week, and to our utter amazement, she was pregnant! I can't understand how that was possible. Both of our male dogs are fixed, and there is no possible way she can leave the yard because of our huge fence and the chicken wire. Not to mention, she was in heat 2 weeks after we found her.

We only found this out recently, so she had to have been pregnant for at least 3-4 months, and the gestation period for dogs is usually nine weeks, AND she showed no signs of showing that she was pregnant, so I wonder if the babies were dead and she just didn't birth them. Is this possible? And is it possible for her to be in heat when she is already pregnant?

If a teaser trailer can make me cry, then God knows what seeing the entire film will do to me.

Don't know if anyone has been following the developments, but I am so mad about the Lady Gaga concert in Indonesia. I don't even...

[Lady Gaga apologized over the weekend to her fans in Indonesia after a sold-out concert she planned to perform in Jakarta was canceled amid threats of protests and violence from Islamic hard-liners, The Associated Press reported.

The concert, which was scheduled to be held this coming Sunday at Jakarta’s 52,000-seat Gelora Bung Karno Stadium, had elicited the ire of fundamentalist Muslim groups including the Islamic Defenders Front, which said that Indonesian youth would be corrupted by Lady Gaga’s costumes and dance moves. Some who objected to the performance said they planned to protest the singer’s arrival at the airport while others said they had bought tickets to the concert so they could stir up trouble inside the stadium. Indonesia, the fourth-most populous country in the world, has more Muslims than any other nation.

Lady Gaga had previously alerted her Twitter followers that the problems facing the concert were twofold: “Indonesian authorities demand I censor the show & religious extremist separately, are threatening violence.” But on Sunday she wrote that the show had been canceled entirely.

“I will try to put together something special for you,” Lady Gaga wrote on Twitter. “My love for Indonesia has only grown.”

The Indonesian police said they would not issue permits for the concert because of security concerns, but some prospective concertgoers accused the authorities of caving into threats from a religious minority group.

“This only shows to the world how weak security forces are in this country, how police are afraid of a bunch of hard-liners,” Johnny Purba, a 25-year-old fan, told The A.P. “Gaga’s two-hour show will not hurt Indonesian Muslims. For God’s sake, she is not a terrorist!”]  - New York Times

[JAKARTA - The decision by Lady Gaga's management to cancel her planned June 3 concert reflects a government that is weak in the face of intolerant political groups, according to human rights watchdog group the Setara Institute.

"The authority of the state should have led to freedom of expression and guaranteed security. These are rights guaranteed in our constitution and in our laws," Setara Institute chairman Hendardi said on Sunday.

Local promoter Big Daddy Entertainment officially announced that Gaga's management had cancelled her performance in the capital due to "security concerns".

Hard-line groups such as the Islamic People's Forum (FUI) and the Islamic Defenders Front (FPI) have condemned the Grammy-award winning pop star for allegedly indulging in "pornography" and promoting "satanic values".

The FPI even threatened to send its members to intercept Gaga at the Soekarno-Hatta International Airport to prevent her from setting foot in the country.

"It's clear that the promoter's decision to cancel the concert was a result of pressure and threats," Hendardi said.

"The tug of war from this [concert] permit acquisition demonstrates that this isn't just a technical matter about the law, but rather has become a political issue that will highly benefit the groups that are controlling it," he added.

Similarly, another critic says that the cancelation of Lady Gaga's concert could lead to negative international perceptions on Indonesia's ability to be a democratic country that guarantees freedom of expression and multiculturalism.

"The world community may still see that Indonesia is a democratic country despite the outcome of this Lady Gaga incident, but they will see the country as one where freedom of expression and different opinions are hampered," Otho Hernowo Hadi, a University of Indonesia social science and politics professor told The Jakarta Post on Sunday.

"It may even be possible that the handling of this controversy could lower Indonesia's democracy index."

The public could also lose trust in the police, Otho said.

"I am certain that strong pressure from minority groups had an indirect influence on the police's decisions throughout this controversy, even if they won't admit it," he said.

Whatever the motive of the police, Otho said that the outcome of this controversy is "a defeat for security".

"The public will see that the state is bowing down to these little groups, and it will set a bad precedent on freedom of expression. It could be that people will be afraid to freely express themselves unless they do so according to the limitations set by these little groups," Otho said.

Separately, an official at the Tourism and Creative Economy Ministry said that his office respected the decision of US diva Lady Gaga's management to cancel her show in Jakarta, but denied that the cancellation would prompt other foreign performers to follow suit.

The ministry's director general for cultural value, arts and film, Ukus Kuswara, told The Jakarta Post on Sunday that the ministry considered the decision made by Gaga's management the best solution under the circumstances.

"I believe that Indonesia will remain an interesting destination for international musicians as well as a potential market for them. In the future, we will have to improve communication between relevant parties," he added.

The ministry previously endorsed Gaga's performance, citing that the Grammy-award singer would boost tourism in the country.

Ministry data show that around 12,000 foreign tourists from Australia, the Philippines and other ASEAN and Middle Eastern countries had bought tickets to the concert and had booked rooms in three- and four-star hotels in Jakarta.

The singer was scheduled to perform at Bung Karno Stadium in Jakarta on June 3.

However, local promoter Big Daddy Entertainment said in a press conference on Sunday morning that Gaga's management had decided to cancel her gig in Jakarta, citing "security reasons" amid a hostile response from several hard-line groups in the country.

Those poor Little Monsters. I hope that whatever Lady Gaga does for them, it's going to make-up 10 fold. She should totally fly/bus/boat all 50,000 of them to another location.